But like I said, the code is buggy. We can try to fix it up, but honestly, its not worth it. Even if the pulse measurement were perfectly accurate (which its not), the sensor operates at 1kHz PWM frequency, meaning you get at most one new reading each 1 millisecond. And since the pulseIn() function used is synchronous (e.g. it waits for a result) it means your loop speed will be even slower than 1kHz, especially on an Arduino UNO, which is slow to begin with. Add to this that you have to have fairly high filter values to further smooth the bad PWM sensor signal, and you’re in a situation where you don’t really have control of the motor…

Switching to SPI will at least make it possible to control the motor from an UNO, but don’t expect amazing performance or RPM speeds…

Hi @runger
Thank you for your message and the explanation, it makes sense with the pulse value and I now understand it

Depends which Nano… if you mean the original one, then no, the Nano and the UNO are both atmega 328P, just different sizes.

STM32 MCUs have many advantages for motor control, and the F4 or G4 series are very fast.
ESP32 MCUs are super-fast, and fairly easy to use. They’re well supported, and would be a good choice if you’re not planning to do current sensing.
Other than this, the other Arduinos, like the Nano IoT, Nano BLE, Nano Sense, or the MKR 1000 or MKR1010 WiFi are all supported, and while not as fast as a STM32 F4 or ESP32 they’re still a lot faster than an UNO or original Nano.
Pretty much all the Adafruit Feather boards are supported.
If you’re looking to save money, a “BlackPill” board is a cheap STM32F4 board in a small form-factor, and the ESP32 boards are generally very inexpensive.

The difference between all of these above mentioned boards and the atmega based ones like the original arduinos is that these MCUs are all 32bit, while the atmegas are 8 bit, and have more limited resources.

If you have a specific board in mind just post here and we can let you know if its compatible.

Hi @runger Thank you for your message…

Okay, I think I will give ESP 32 a try. I was not aware that I could run those with Arduino code in the Arduino environment. I will give it a try and I am excited to see the result

Like you say, there is a bewildering array of ESP32 modules, and even more independent boards made with them, so it is hard to choose.

All of the ESP32s should work, but the ESP32s that have a “MCPWM” Unit are much better for doing motor control. That is most of them, but not, for example, the new ESP32 C3.

So problem #1 is identifying which module is actually being used on the boards, and then problem #2 is checking against the ESP32 datasheet for that module that it includes the MCPWM unit.

In terms of CP2102 or CH340 I don’t think it matters. Its the type of Serial to USB converter that is on the board, but I believe they are all supported by current versions of Windows or Mac OS.

TMC 6300 is my favourite low power choice.
My suggestion is to run it on 5V instead of 10V.
I know it is designed to run off max 11V but it will produce a lot of heat.

For haptic textures purposes 5V supply limit and 4V driver limit should be more then enough. Strenght of texture you can then control with PID.

(Also In Torque PID you want keep limit at 4 - torque PID can be tricky and depending on your setup it can spike current quite high. Worth to setup current limit on your bench PSU)

Regarding changing baudrate, no downsampling is not necessary. 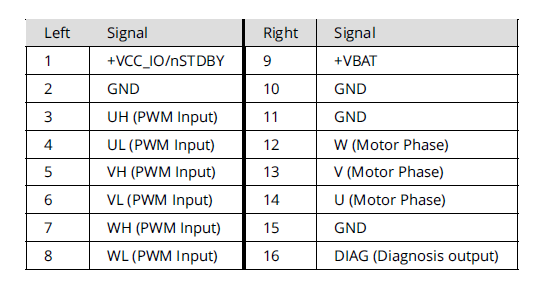 The MagneticPWM sensor is really the worst supported one.

However, it works much better in interrupt based implementation than in blocking one. In your code @JesperSondergaard you’ve used the blocking one, you can find out a bit more about it in the docs : Magnetic sensor PWM | Arduino-FOC

but basically the blocking one used puleIn function that has pretty bad resolution and it is only intended to be used if every other way is not possible.

So please consider using pin 2 of your arduino as encoder_J and after senor.init() call sensor.attachInterrupt()

Here is an example code from the docs:

But even with thhis approach you’ll still be far better off if you’d just use SPI.

Regarding the duty cycle: 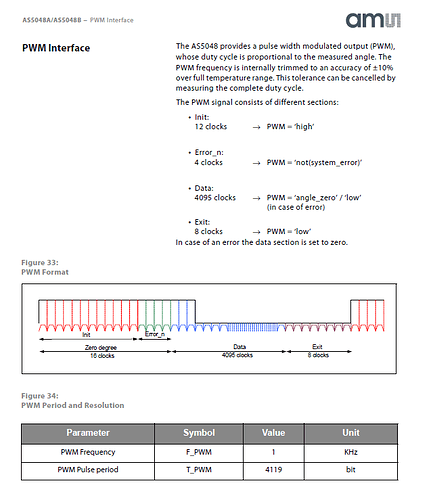 The constructor of the MagneticSensorPWM class takes as an argument the value of microseconds of the shortest and the longest pulse duration, not the duty cycle values from the datasheet. Because different sensors have different PWM frequencies. And AS5048 usually has a frequency of 1kHz. The duty cycle is has 4119 discrete timesteps as you’ve seen. But these steps are all within 1ms. So that’s why the min value is a few microseconds and max value is almost 1 miliseconds (1000us).

Yes corret you supply 5V to +VBAT from your bench supply.
And +VCC_IO between 1.8-5V (i initially said 3.3 as i assumed its what coming out of arduino),
Important is that you hook up VCC_IO and GND to your MCU. Sometimes TMC have some irradical behavior if there is no common ground with MCU.
You will notice that without +VCC the blue PWR diode is dimmed or it flash/flutter as PWM signal goes to BOB, once you hook up VCC and GND to MCU the diode will light up and stop flutter.

Other than this, the other Arduinos, like the Nano IoT, Nano BLE, Nano Sense, or the MKR 1000 or MKR1010 WiFi are all supported, and while not as fast as a STM32 F4 or ESP32 they’re still a lot faster than an UNO or original Nano.

Hi @runger
I tried to connect my MKRWIFI 1010 to the setup with these pins,

But I do not get any message in the console, that I can type a value? It is as if the code does not work correct on the board? Is the MKR wifi 1010 supported in the FOC?
If I switched the pins to my normal arduino UNO setup and then everything worked fine again?

It’s ok to leave out the parameter to motor.move() - then it will use whatever is set as motor.target from before. So if you’re using commander to se the target values, you don’t have to pass them.

I tried to connect my MKRWIFI 1010 to the setup with these pins,

MKR1010 should work. But you have to use the right pins. I have to check if I can find a sample program in my collection when I get to my workshop.

But I do not get any message in the console, that I can type a value? It is as if the code does not work correct on the board?

Try adding a SimpleFOCDebug::enable() to the beginning of your setup, after the Serial.begin()
Then you should see some debug output regarding which pins are being used.

So I think it should be:

Those pins also check out with the code.
There’s a few other combinations you can use if you don’t like those, but the SAMD21 is very fussy about its PWM pins. You have to use the right combination, and the right pins on high and low side for it to work.

So I know got the ESP32 connected and it works in open loop. I Can make the GM3506 motor spin around and also set an angle.
I am still struggling with the SPI when trying to get the AS5048A to work

I tried the simple code for getting the SPI to work, but the monitor just freaks out like this: 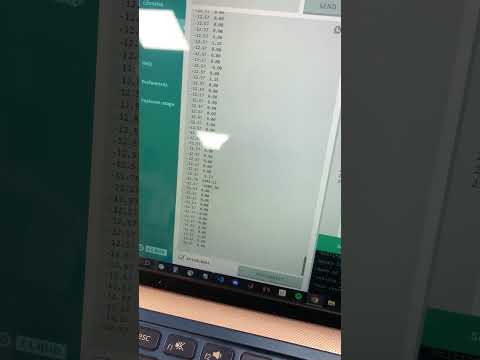 I dont know if it something with the connections on the AS5048?
I saw on a post that there has been som confusion about the wiring from it?

I followed exactly the same procedure defined by Owen to find what color matches what pin. I’m connecting this encoder to ESP32/ESP8266 boards and It doesn’t work.If I connect power to either 3.3V or Vusb (~5V), the ESP doesn’t even start. I even burned ESP32 trying it multiple times. I experienced it before only when I messed with polarity of the sensor. But here the polarity seems right to me. So there must be something I don’t understand. The main question - will it work at all? ESP8266/E… 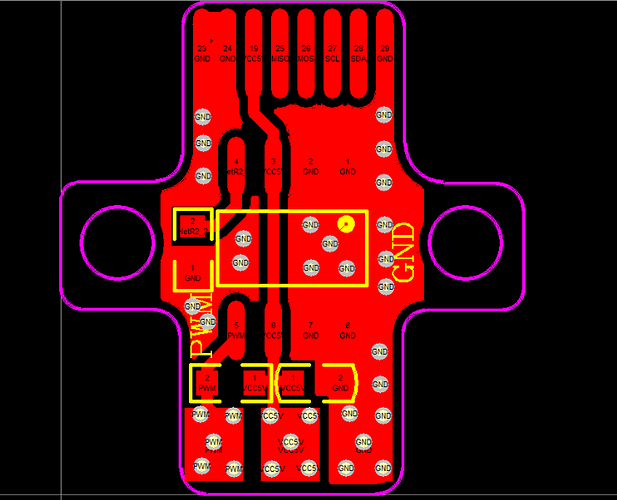 I hope this help, 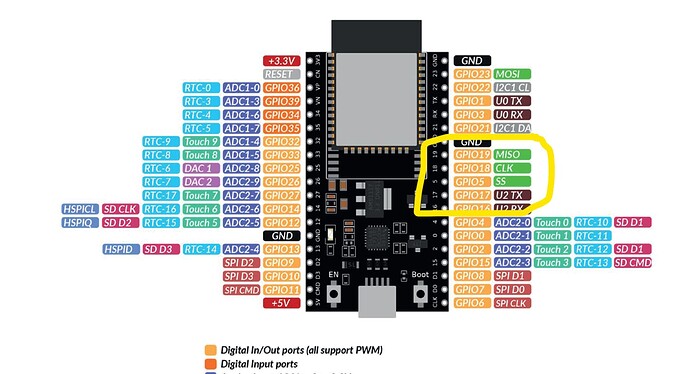 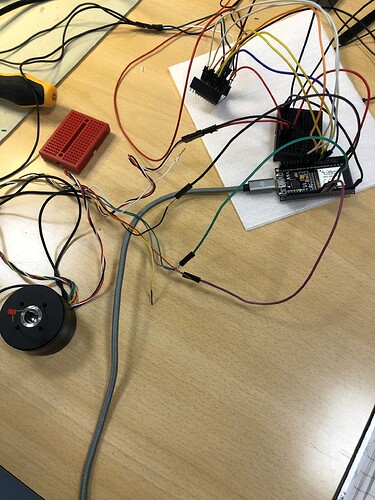 Here is the code:

Your read out from AS5048 seem normal, the right side column value you get is velocity, you probably want to enable some basic filtering (LPF) of signal so it doesnt pick up any unnecessary noise eg.

On the video i cant tell whether angle value changes while you rotate it or you getting some abstract values even if motor position is at idle.

I would also suggest to double and triple check your SPI wires, i see you are using them pluck in connectors, they often cause a problem, once i spent a week troubleshooting the problem, eventually finding out that issue was as simple as faulty wires.

Also if im not mistaken (someone correct me if im wrong), the AS5048x need both MISO and MOSI connected, i see you left out MOSI unconnected just now.

(Sometimes, some sensors like MagAlpha does not need MOSI - unless you want to program it’s zero angle or change natural sensor direction)

okay, Ill try to connect both MOSI and MISO.

So I will try to run some new wires on this other sensor.
Is this correct acco. to the datasheet?
Not sure if the MISO is running up to pin 3 on a VIA?

If you unsure just pick up your multimeter and check continuity between 5th pad on the board and 3rd pin on the chip, probably via is under the pad or even under the IC

Of course, yes, great idea! It is connected like that with a via

So it works now that I changed the wires

This was the setup 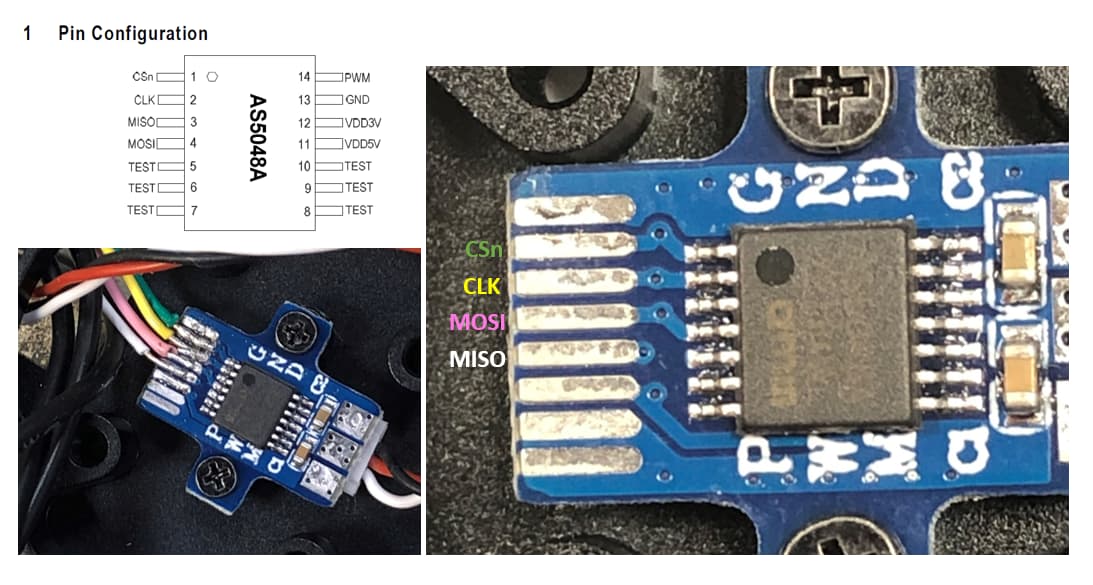 When It runs on a 9600 I get these values, that goes up/down, when I turn the motor. 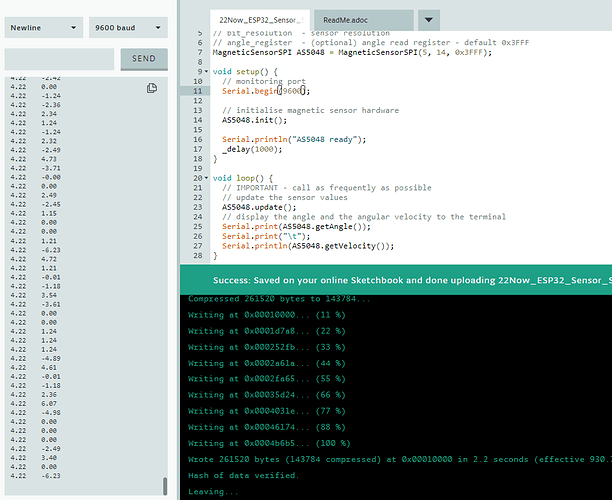 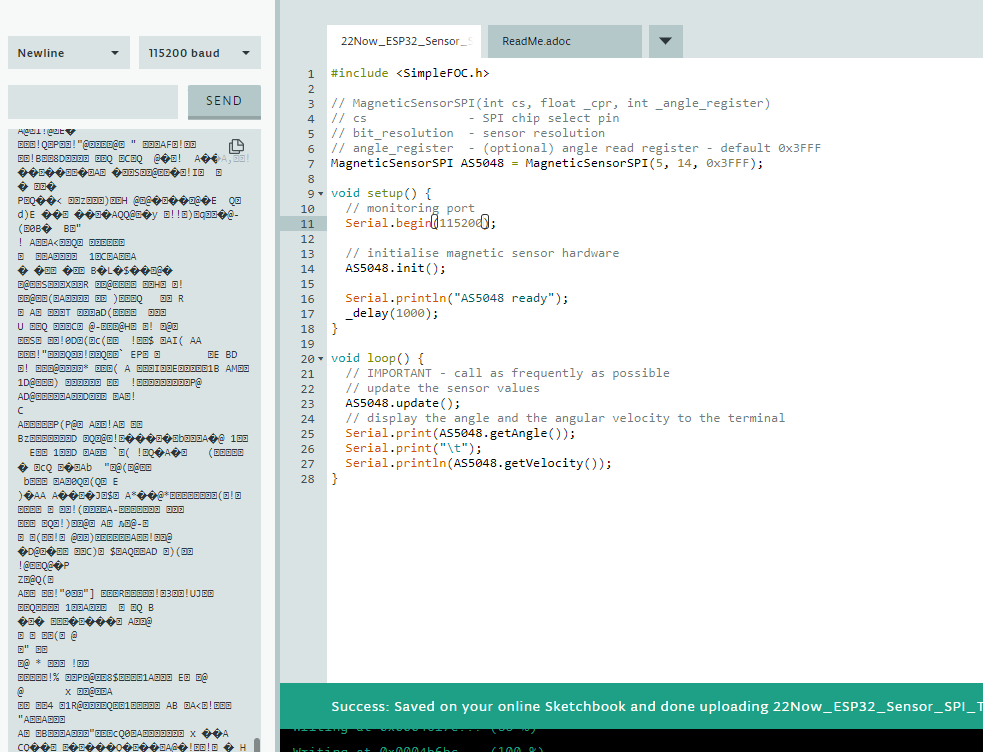 Congrats on make it working:)
Your reading look right but you still get these Velocity spikes when in idle.

You could try lpf filtering to smooth out the noise.
motor.LPF_angle = LowPassFilter(0.02)
When you using it in closed loop.

Depends on the motor and driver I guess.

I’m unsure why you have mangled output of serial monitor despite setting correct baudrate in your code and in monitor. I don’t use Arduino IDE (I remember it used give me wonky serial output, often frustrating).

So, I tried the code there was here:

Here is my input from the monitor:

Here is a video of the show: 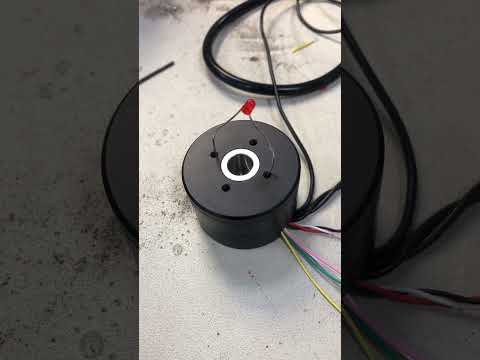 This is how my code looks:

Since we’re on Haptic Textures topic and you got your setup working you might want to try this:

also create another file in same location where you have main.cpp and name it