I designed a ESP32 driver using the DRV8313, AS5600 and Canbus transceiver for a robotics project im working on, but I’m having issues with the motor fine tuning…

I’ve been trying to play with the PID variables in full_control_serial.ino for a while, but I can seem to eliminate this little twitch that occurs when the motor is sitting at the setpoint.

Has anyone had a similar issue? (I’ve already swapped the pwm library with the one in the github docs)

Please see the video link below! 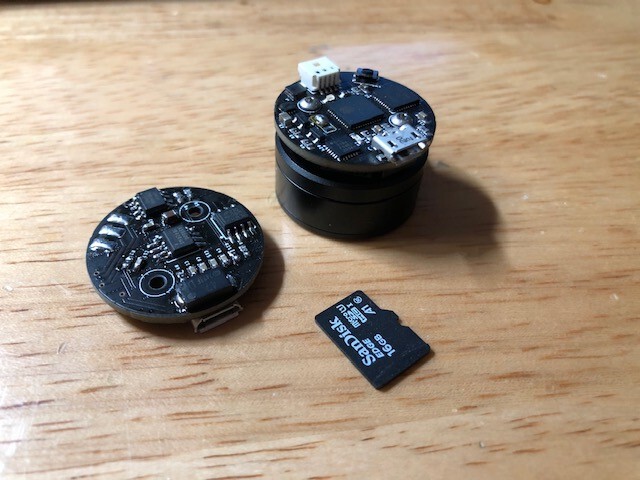 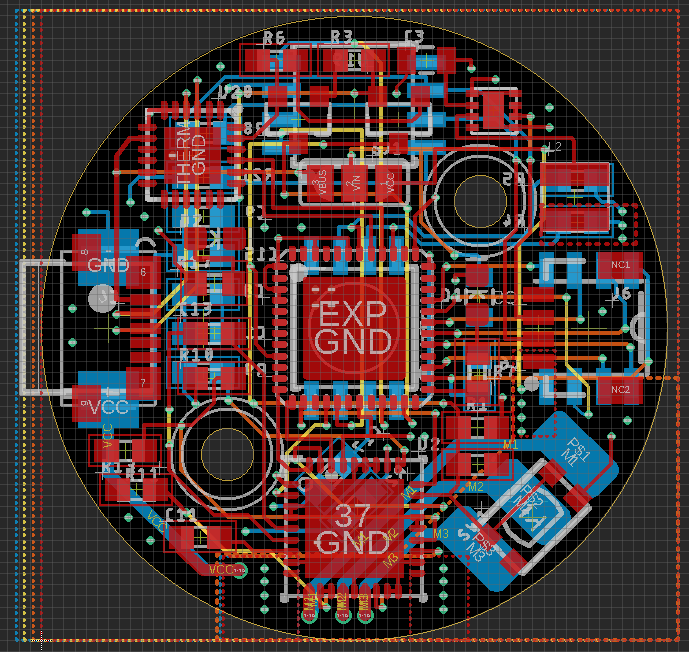 // maximal voltage to be set to the motor
motor.voltage_limit = 6;

Are you using the ESP32 pico?

Try putting D to 0 and TF to 0 and a relative high I, which you already have. Usually what I do to remove that oscillations.

Yea its the pico

I tried that… but no luck. I get major oscillation if i do that:

My issue isnt so much an oscillation, as it seems to be a miniature spike… the motor.voltage_q ( blue ) in my graph slowly increases( 0.25-1 second) the effort level until ( as i understand ) until it gets to a voltage threshold where it moves the rotor, and pops back up to the setpoint instead of a gradual motion.

the total displacement is only ~1degree, but its enough to annoy the hell out of me lol

right now the setpoint and the target are ~0.01 radian off, but its enough for the effort to build… is there a way to create an acceptable error in the pid software, so that if the target setpoint and the shaft angle are within xyz degrees, the PID essentially turns off until the next command is issued?

but its enough to annoy the hell out of me lol

I know exactly how you feel.

I see in your video that this behavior doesn’t happen always. Am I correct? if so usually it’s harder for motors to hold a position because of the cogging. So if you motor has for example 11 poles, there will be 11 places that the rotor has a bit of trouble holding nicely.

it jumps in every location that i’ve tried… sometimes it will settle after a while.

its just hard to see in the video.

i can eliminate the jump… by getting rid of the I&D terms… but i need those for what i’m doing.

its a gimbal motor with 7 pole pairs… but i’m sure it has a little cogging… ill swap the motor and see if there’s any change… process of elimination.

I would suggest you to use the motor commands and rtune the parameters with it. It will make the iterations faster.

My suggestion would be.

Nice board @digitalnomadjoe.
You don’t state whether you are using the i2c or analogue interface with AS5600. Analogue has quite a bit of noise and a dead spot near 0 deg.

Thankyou for the support gents!

I took a step back and discovered something… maybe you’ve seen this before?

I added a few lines of code to the examples to monitor the sensor output. I’m getting clean position data from the sensor, but the velocity data is very noisy:

When i verified the design in testing before building the board, i only tested the position… thinking that its derivation (velocity) would be clean if the position was clean…

Have you seen this before, and could this be what’s causing my jitter?

So, i found a patch… not the most efficient solution, but it works.

as a recap, i appear to have nice tuning, with the exception that once my target_setpoint is reached there is a very slow drift in the motor.voltage_q as shown below. This drift leads to an eventual spike, which causes the motor to occasionally twitch around the setpoint.

i noticed through the console, that even the smallest delta b/w the shaft_encoder and the target_setpoint ( say ~0.01 rad ) would initiate this drift.

i “fixed” the issue by adding a settle() function, which cranks down the motor.PID_velocity.I to 0 if the error b/w the target_angle and the shaft_angle is acceptable.

im not sure whats causing the underlying issue, but this will work for now

when i run the open loop angle control… the resistance around the setpoint is very smooth, meaning that if i move the motor manually, the resistance is spring like.

when i do the same with the closed loop angle control, there is a slight vibration for the first couple degrees.

any ideas what is causing this?

openloop angle mode, by definition, doesn’t know that you have turned the motor or by how much. It is just magnets / electromagnets trying to align. If you turn it far enough it’ll happily align to the next matching pole. It is going to feel smooth and springy.

Closed loop knows that you are moving the motor - the angle error goes through your Angle PID and cascades to you velocity PID and out pops the voltage.

I’d spend some time running in velocity mode tuning your velocity PID, once that is done angle PID is easy.

To tune velocity, start with something like a target of 10 rad/s and P=0, I=0 and increase PID.P term until speed reaches about 6 rad/s (at about 8 rad/s it’ll start to oscillate). Then increase PID.I to take up the slack. Even a small I term (e.g. 1) will take you to 10 rad/s but it might do it too slowly for your liking.

In summary getting P as high as possible (but not vibrating) is better than having a high I term.

Also - you can try reducing the frequency you call move() to about once every 1ms. ESP32 are fast and calling it at 10K is going to be noisy. By sampling less often the velocity ((new angle - last angle) / 0.001s) has less noise, it works a bit like increasing Tf from 0.001 to 0.1. Note: you always want to call loopFOC as fast as possible.

this is my result:

and below is with the following settings:

I can’t stress enough how this can have very good results, specially since you’re having issued with noise in velocity measurements. Put motor.move() in an if and experiment calling it every 5, 10, 15, 20 cycles and let’s see if that helps.

in other news the velocity control works really well… I’m very tempted to use the existing voltage control and close the loop around that with the AS5600.

I just want to check whether you understand what I’m suggesting, something like this where you try changing 20 to values between 5 and 200

What is your serial baud rate? 115200 is a sensible default but I sometimes go x4 this

I appreciate the help!

yup, that looks close to mine.

Just in case, here is my main loop now:

I’ve jus tried with those settings on a similar motor and an as5600 i2c and got some similar shakes.

This worked for me.

i changed the params to match yours, and the count

Here is my plot:

the motor goes smoothly for 45 degree, slows down to a stop, and then continues to the next radian

yea i used the AS5058B originally, but switched to get the cost down

I need 12 of these drivers for my project lol

Can you send me a capture of what the velocity mode plot is supposed to look like after tuning?