Hi!, i’ve been working with the TLE5012B sensor and library from the manufacture for arduino (TLE5012B - Arduino Reference).

I just follow the doc about supporting new sensor, i create the . h file and cpp file but when i initialize the motor.init(), it crashes and stop working or just restart.

I guess there is an compatibility issue between the TLE5012B library and FOC lib.

Here is the h file:

and here the cpp file:

I must admit I am not sure what is the problem from your description.

The TLE5012 is not directly supported by SimpleFOC, but it looks like you are taking the right kind of steps to get it supported.

I have some TLE5012 boards here waiting to be tested, I will try to get to this over Christmas and create an “official” driver for them if I can get them working.

In the meantime, if you could monitor the SSI communication using a logic analyser or digital oscilloscope, you might find more information to help you debug the problem.

In the meantime, if you could monitor the SSI communication using a logic analyser or digital oscilloscope, you might find more information to help you debug the problem.

Great @runger !!, i’ve tested this sensor with the stand alone library from infineon and works great, that’s the reason i want to use this sensor with your nice library, i guess the problem is with some clocks/timers initialization within both libraries… maybe at the time FOC configure the timers /clocks the TLE library just cant comunnicate with the sensor may be too fast or too slow…

I will analyze with the osciloscope SPI lines and post the results using FOC and not using it.

Hi @runger wondering if you had the chance to check it out?

Maybe you can try the generic sensor implementation:

Hey everyone, Recently we have added a new feature to the dev branch. Further simplified support for the new position sensors. Instead of the writing the new sensor class as described in docs, all you need to do now is to implement one function in you Arduino sketch. The process is very simple, in your arduino sketch you define the functions that read your sensor (and intialise it optionally), for example: float readMySensor(){ // read my sensor // return the angle value in radians in betw…

You’ll need to use the dev branch though.

Hey, actually I have it in front of me right now, I was working on it the last few days.

I have based my solution on this code here:

which was written by another member of this forum.

I’m trying to make it more general, i.e. not use hard-coded pins and SPI instance.

However, this code I’m extending is specific to STM32 MCUs. The library you’re using is for AVR and InfineonXMC…

The problem is that this sensor uses half duplex SPI, an uncommon thing that is not implemented in Arduino framework. So you have to speak to the sensor “outside of” Arduino framework. The Infineon library certainly looks like a comprehensive implementation… they provide a cross-platform SPI3w abstraction to fit Arduino’s concept. :-/ perhaps a bit overkill just for reading the sensor, and its hard to see what’s going on exactly. It looks like they might be using timers.

Which MCU are you using? If you’re on one of the supported architectures, I think Antun’s suggestion is a very good one.
If you’re on STM32, I might have a solution for you in a few days, but no guarantees, its not working for me yet

So, for STM32, I have it working. Its just an initial implementation, you can currently find it here:

Drivers and support code for SimpleFOC. Contribute to simplefoc/Arduino-FOC-drivers development by creating an account on GitHub.

For the moment, you could copy the classes to your project if you want to try it out. In the next weeks we’ll probably manage a proper release, but for now it is on this branch in git.

And this is my test setup - haven’t tried it with a motor yet, btw, just checked it outputs 0-2PI as you turn the motor by hand… 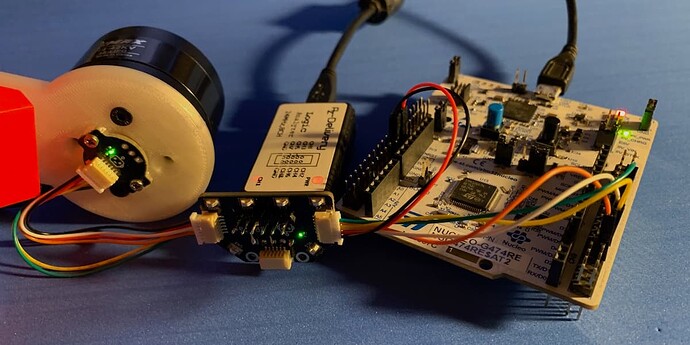 I’ll try to give it some more time in the next weeks, I’d like to get the velocity register working to compare that with the computed velocity we normally use…