Safety aspect of communication between charger and battery

Since I have been involved in this battery pack design. The logical thing is to ponder how one should charge such a battery. There has been some safety warnings from people, concerned about Li-ion battery meltdown, but I assure you, by putting in some carefull thought, and by using inter communication between pack, BLDC controller and charger, a battery pack can be made to stay well within cell spec.

I therefore propose a MCU controlled boost charger, which are able to communicate with the pack, driven by a typical PC 500w PSU. Since the voltage on the charge cables determines the current flowing into the pack, a simple boost circuit can deliver the voltage needed to control the current. Having the data from the BMS (cell voltage, temperatures, current flow) will all make it possible to do “safer” charging compared to non-linked systems. In such a system, the charge cycle will be terminated long before any thermal runaway.

I think depending on the actual power levels you need PC power supplies can be great, or not.
They divide the “500W” they’re rated for among lots of different output voltages (see the output plug’s pinouts), none of which can provide 500W of power. Typically the 5V and 12V rails provide most, but also split between the main plug and the extra ones for the graphics cards…

I’ve been hunting around and have found LED transformers (e.g. Meanwell) to be a good source for higher power levels at 12V or 24V…

Ya, it also depends on charge time. The optimal solution would be a wall plug to variable dc w. some interface. If the PSU can deliver just 300w on the 12v wires, that’s 5 amps at 58v. With 5 amp charge it could charge in 4 hours (20amp/hours)

The cool thing about a ATX PSU, is the possibility to charge the HV pack w. 12v wires and the LV pack w. 5v wires, on the same GND.

How to Avoid Inductor Saturation in your Power Supply Design | Article | MPS (monolithicpower.com)

Have been playing around with the values for inductor, switching frequency, amp rating.

The charger will se quite high currents on the 12v port, so the logical thing is to do parallel boosting. The switching frequency determines the inductor size and thereby the inductor current rating. So switching with say 300khz will make it possible. But what about switching losses? What kind of current flow will the MOSFET in a boost circuit see? 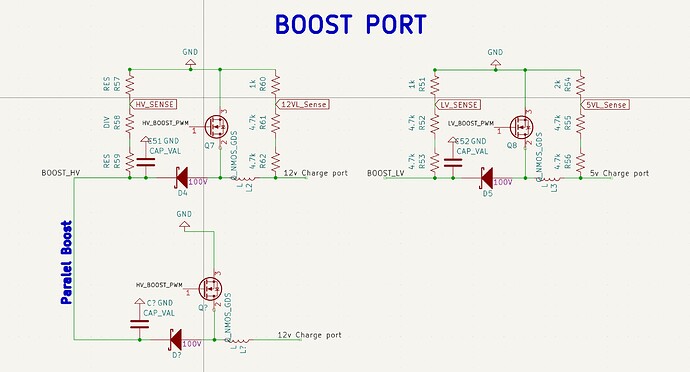 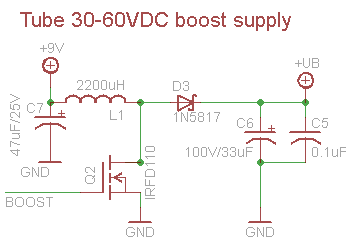 For many small projects, its cheaper and easier to DIY a boost converter than to buy a specialty chip. DIY converters are usually not as efficient but they're quick & cheap!

Its getting complicated. Do you think the 8mOhm resistor, referred to by Analog Devices, is there to even the current sharing. At 5 amps (58.8v) the voltage drop through a 8mOhm resistor would be 0.04v and dissipate 0.2W

Edit: This IC has a current sensing control loop for each boost converter. hmm… Complicated

What if the current sensor was across the 8mOhm output resistor? Surely, measuring the bi-directional current on each boost output, will indicate if the switching is synchronized.

If boost1 output is drawing more current then boost2 output, then the MCU will notch up the duty cycle on boost2 MOSFET, thereby increasing boost2 voltage, leveling the voltage/current draw on the two outputs. Using the same timer.

Since the battery resistance determines the current flowing at any given difference in voltage, we can see that the actual voltage difference for each cell changes with the shifting SOC (state of charge) because the resistance in each cell changes. What if the mosfet represent a path to GND, not so much a bridge. Somehow the current in the inductor is charged and then cut/chopped. That current now spikes to form a path into the capacitor on the other side of the diode. Is it not more like a pump then a bridge to GND.

Hmm… I think the ATX boost scenario is unrealistic. It has to be a 60v PSU and a buck converter for much lower switching currents (if charging a 14 cell battery to 58.8v). 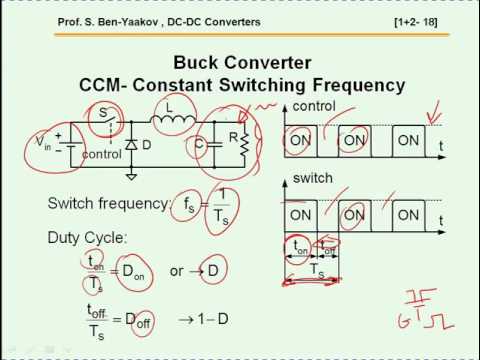 Consider a computer power supply, where the input is 5 V, the output is 3.3 V, and the load current is 10 A. In this case, the duty cycle will be 66% and the diode would be on for 34% of the time. A typical diode with forward voltage of 0.7 V would suffer a power loss of 2.38 W. A well-selected MOSFET with RDSon of 0.015 Ω, however, would waste only 0.51 W in conduction loss. This translates to improved efficiency and reduced heat generation. Another advantage of the synchronous converter is that it is bi-directional, which lends itself to applications requiring regenerative braking. When power is transferred in the “reverse” direction, it acts much like a boost converter.The advantages of the synchronous buck converter do not come without cost. First, the lower switch typically costs more than the freewheeling diode. Second, the complexity of the converter is vastly increased due to the need for a complementary-output switch driver.

Im gonna focus on how to charge the low-voltage pack from the regulated input. With a synchronous buck converter, the diode is replaced by another switch, witch has to be on a complimentary MCU pin. This is exactly what SimpleFOC does in 6 pwm mode, so the setup for timers, deadtime etc. is the same. 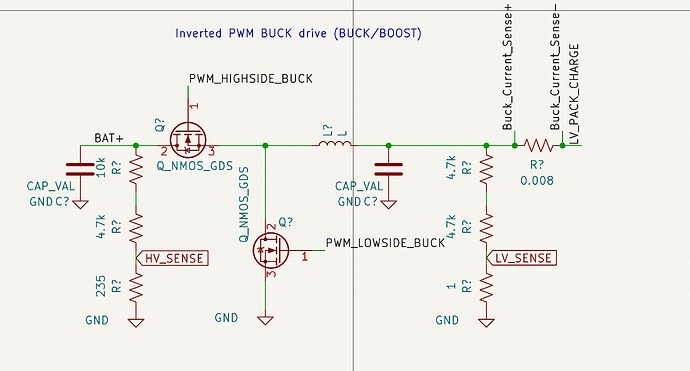