Or does current only flow during the rise?

Except for some parasitic effects, current flows in MOSFET gates during rise and fall time only. Imagine the gate as a capacitor which you are charging or discharging. Once it is charged or discharged, the current is close to zero. This is also the cause why power consumption in MOSFETS is proportional to the switching frequency.

Be aware, that this is very different to bipolar transistors, where everything is current controlled (as opposed to voltage in MOSFETs)!

Finally got the hall sensor problem sorted. I made the new linear actuator body with sensor pockets 1.5mm farther from the center, but it still had the same problem. I think the field induced in the stator by the rotor magnets was competing with the magnets themselves. The radial placement probably was indeed a problem, but the final fix was a shorter spacer between the bearing and rotor, putting the rotor magnets axially closer to the sensors as well (the stator lip almost rubs on the sensors now). 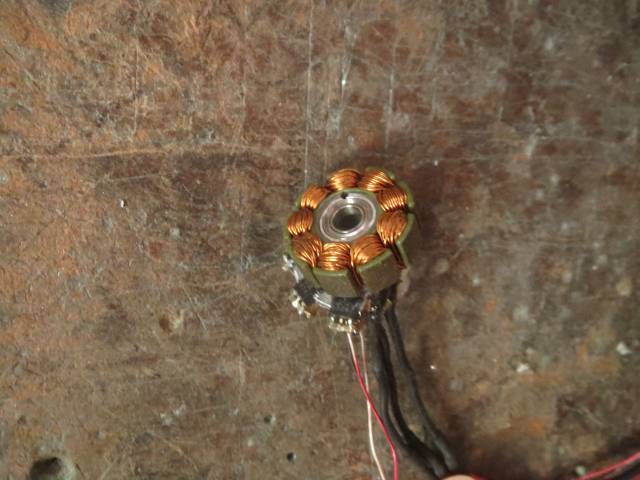 As specified by Valentine in the original Lepton v2 thread, I’ve soldered on a couple 470uF capacitors to get above 1000 total. And some skinny little battery wires for these first tests. Plenty for this little motor, but stress testing will need fat boys like the motor wires. 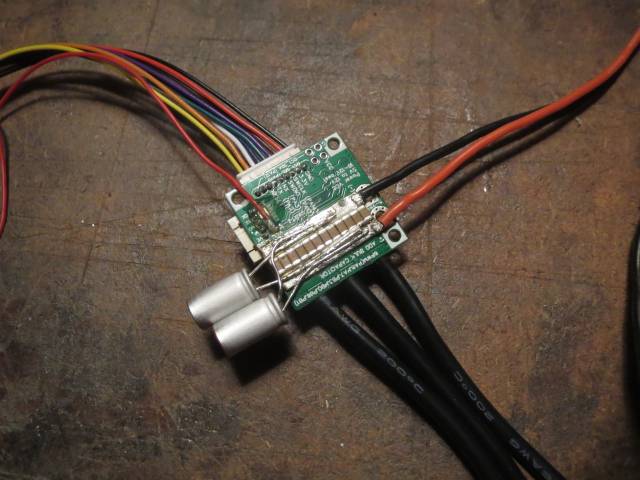 I’ve also added a servo tester as an easy way to command motor position without being connected to the computer. 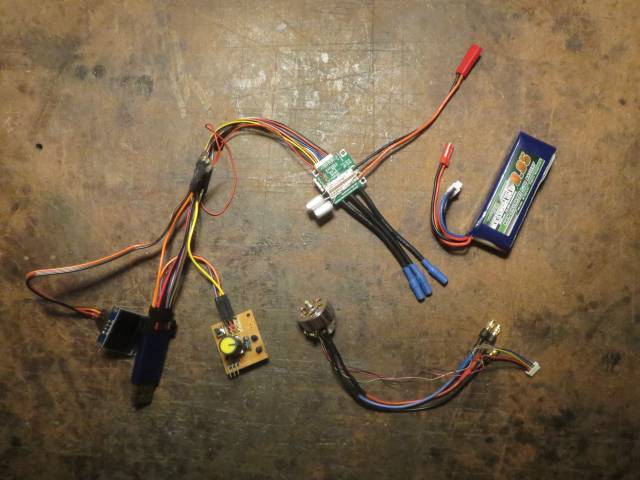 Still one thing I forgot to do, which is to add a short wire connecting the high voltage rail to the mid voltage, which will otherwise be unpowered without the ST Link. But after that, motor testing begins tomorrow!

First test is a fail, but not too surprising. And partially successful too because the motor did move a few steps of the calibration sequence before it emitted a small puff of smoke. Most likely there was some damage to the winding insulation either from machining out the original stator mount or subsequent handling.

I had checked for shorts and couldn’t find any, but considering how fast it happened and how cool everything still was, I doubt it was over-current. The original winding is 2300kv, 0.3 Ohm, but I had voltage limit set to 1 and current limit set to 2 using voltage-based current limiting.

The Lepton appears to be fine, so I will re-wind the stator for lower kv and try again. It looks like the original winding is 28awg delta, so if I use 30awg wye I should get around 850kv and 1.5 Ohms. Although my spool is just about empty so I’ll probably have to buy some more.

Almost working now! Turns out I did have enough wire left. And it seems the original winding was a bit finer than 28awg because it was 29 turns per tooth, so by calculation 46 turns of 30awg would be the same total mass of copper, but in reality I could only fit 40 turns, and it came out 15% heavier. Which is good, because that means I should have about 7% higher torque capacity than before, for much less than 7% higher total weight.

I did have a slight mishap, because that extra copper made the coils stick up higher and get scratched by the rotor. I coated them with shellac to repair the insulation, clamped against a piece of wood to squash them down, and then added more shellac for good measure.

Before the squashing, I used the original longer spacer and tested with a drone ESC which worked, and then sanded the spacer down to a medium length and tried the Lepton, which went through the calibration sequence just fine but still was not getting good sensor readings.

After squashing so I can use the short spacer, I get good sensor readings, but the motor still isn’t turning on command after calibration finishes. It does seem to have some holding torque, and twitches around a bit if I turn it by force. And everything stays cool, so that’s good.

I’m pretty sure the correct sensor placement for this winding scheme is to have them centered on 3 consecutive stator teeth, but just to be sure I tried rotating the stator by half a tooth so the sensors are half way between teeth. Made no difference.

Tomorrow I’ll try fiddling with settings. For one thing, I never updated the resistance and kv for the new winding.