Stepper driver board for SimpleFOC

I’d like to show you the current draft of the FOC Stepper Driver I designed. I already mentioned a few details in my previous thread, but now I’d like to give a full overview.

Before I go into details, these are the design goals/specifications I’m looking to achieve (ideally, not necessarily with the first revision):

At the moment, I’m not sure whether the goals are achievable or if the limitations of stepper FOC (high pole count requiring high encoder resolution) are too restricting.

For the first prototype, I’ve made the following choices:

There are some details I’m still wondering about - I’d appreciate any input on this:

Phew, those were many details - I probably still missed some. Please don’t hesitate to ask for clarification if something is unclear.

I’m looking forward to any thoughts or suggestions!

I hope these are sufficiently readable.
Edit: If you open the images in a new tab, they are shown in full resolution, at least for me 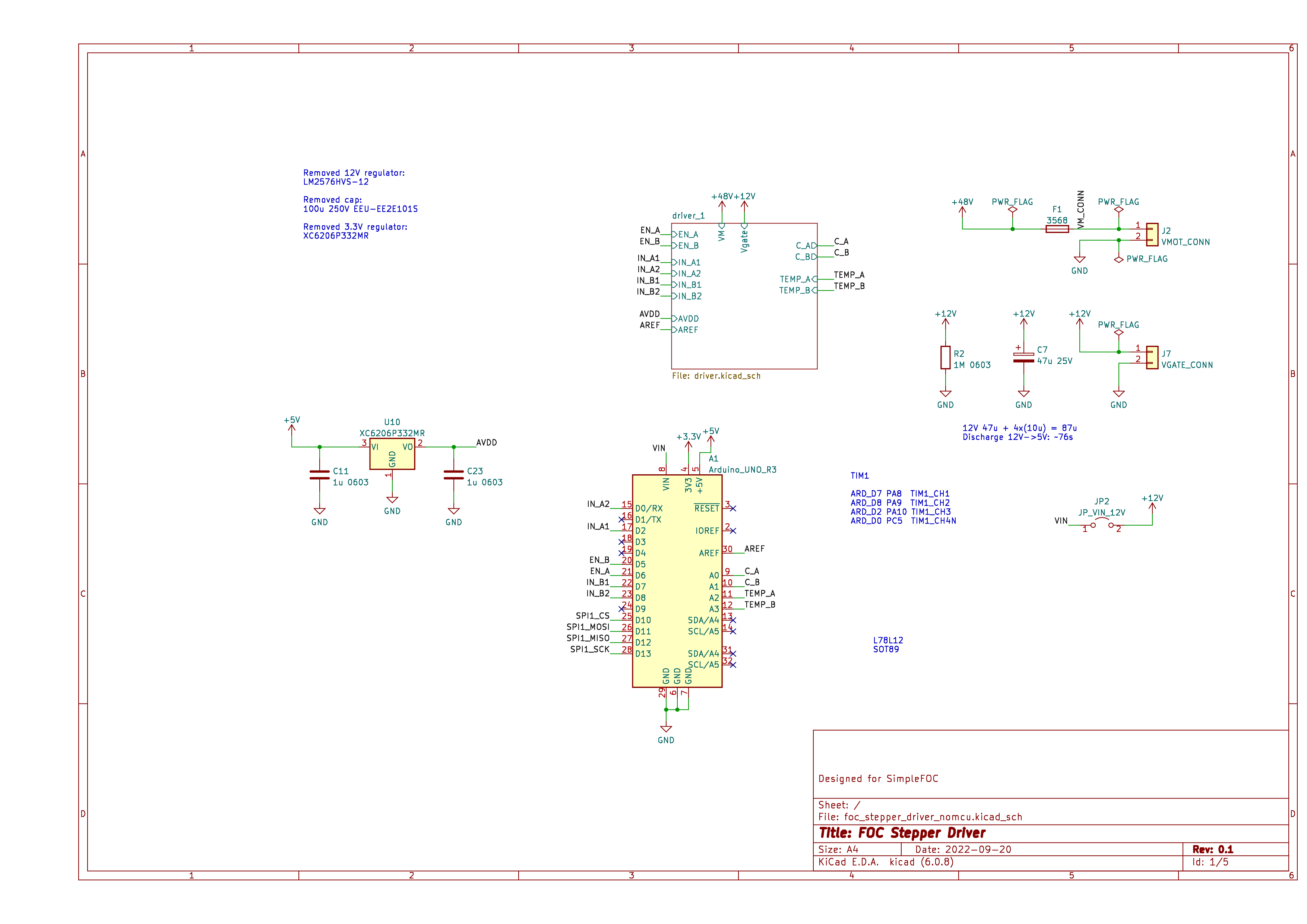 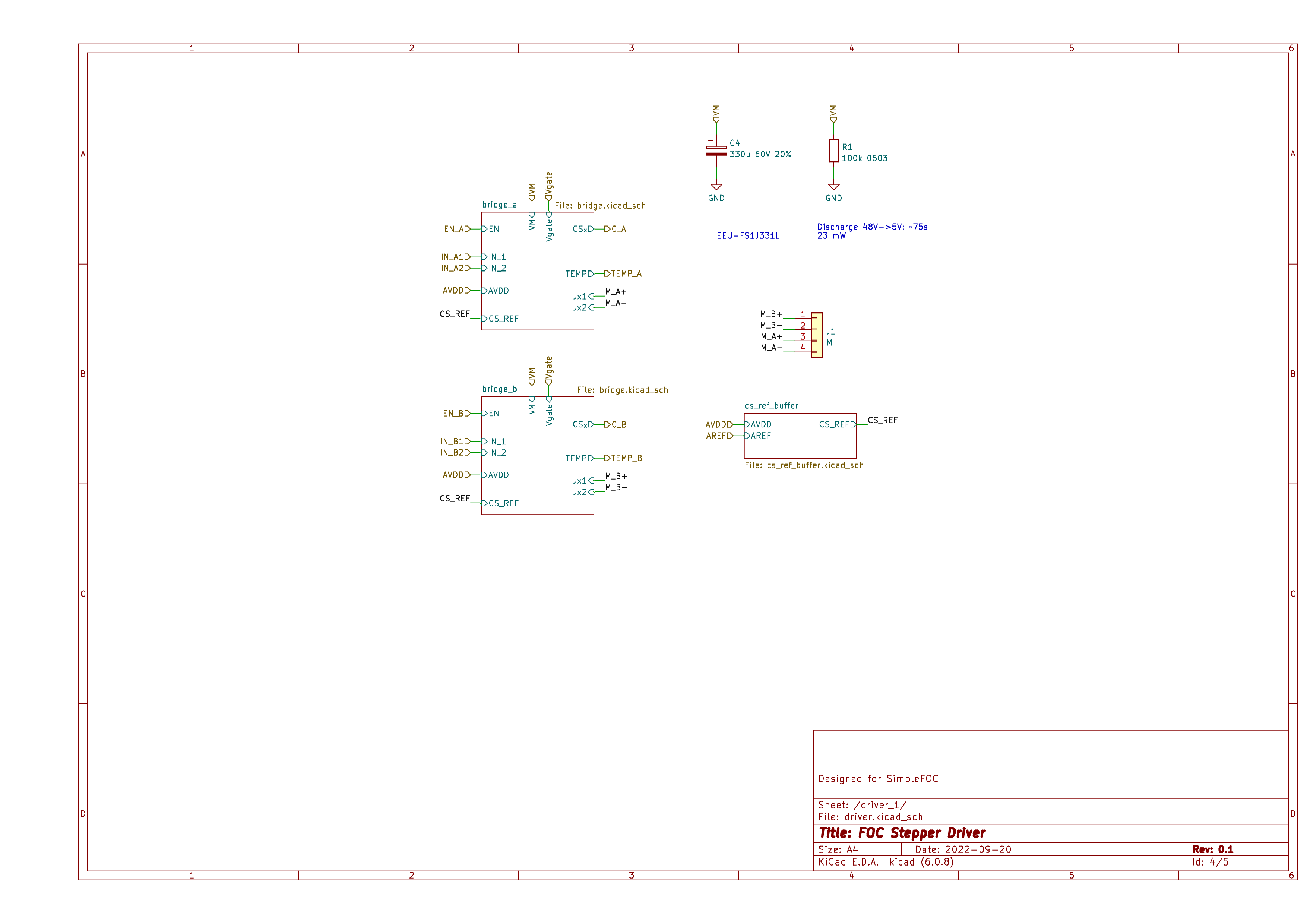 One of two bridges. 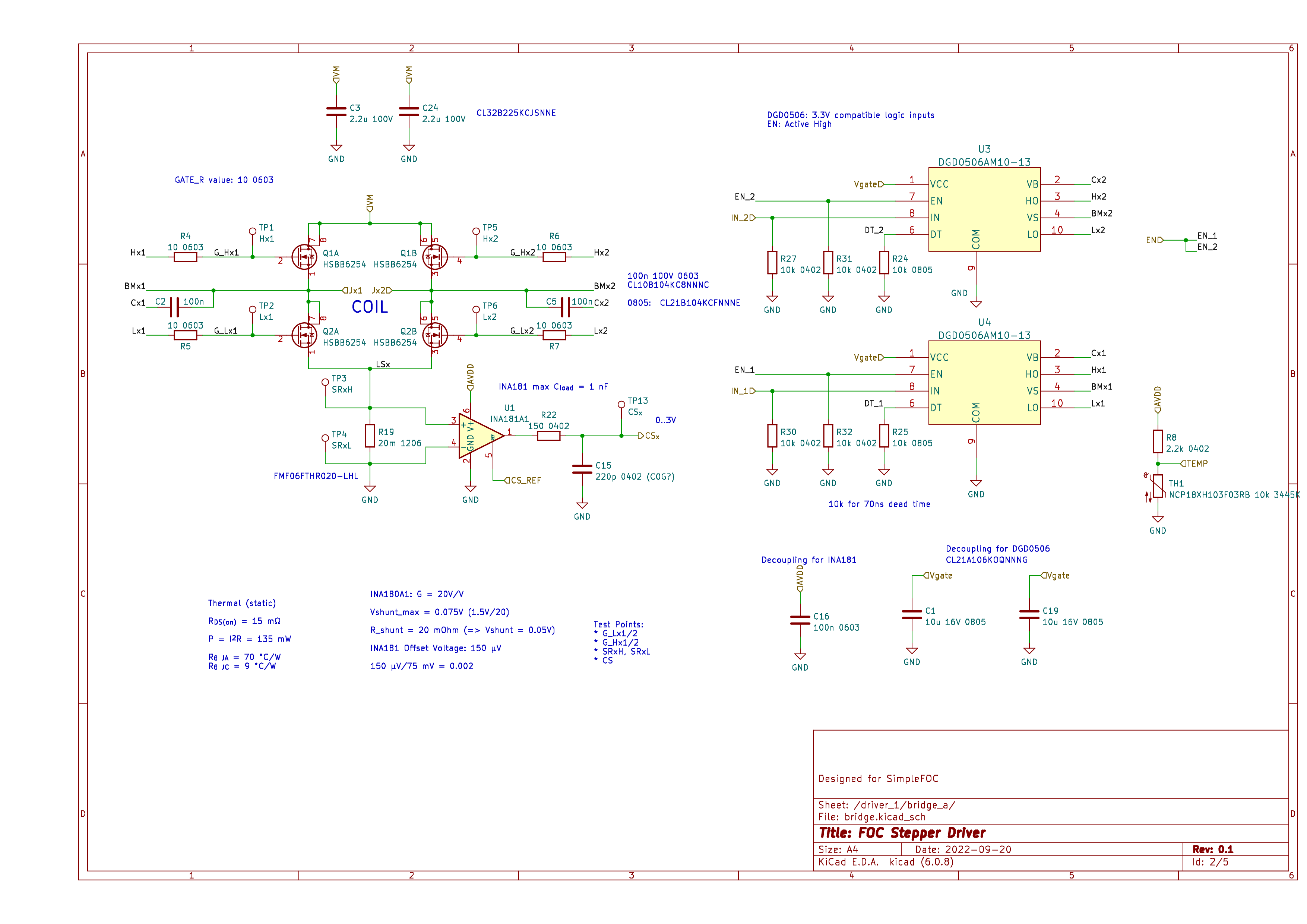 Nothing exciting here, just a jumper that allows choosing between a midpoint (1.5V) voltage reference based on an AREF voltage divider or using an external input. A LMV321 opamp acts as a buffer in case the external reference is a high-impedance source. 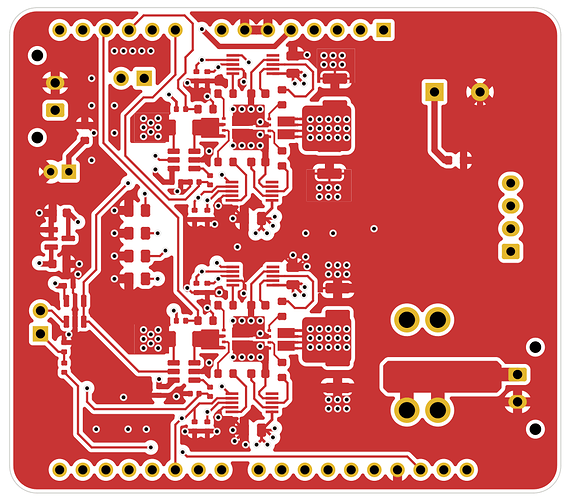 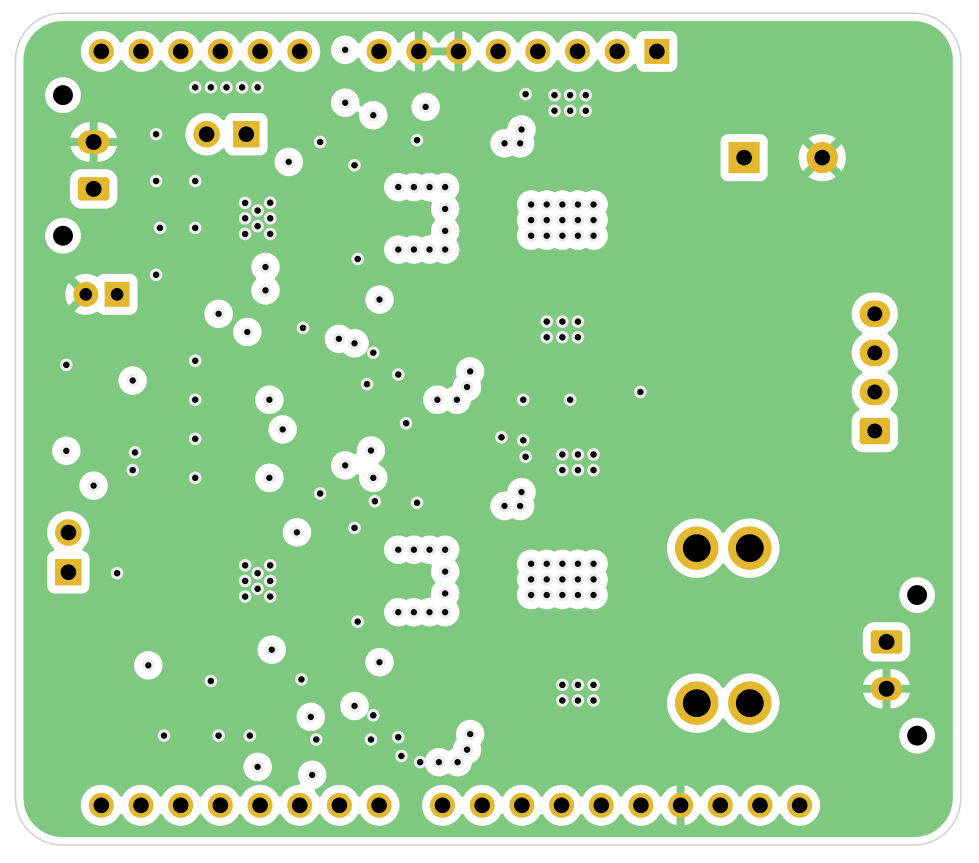 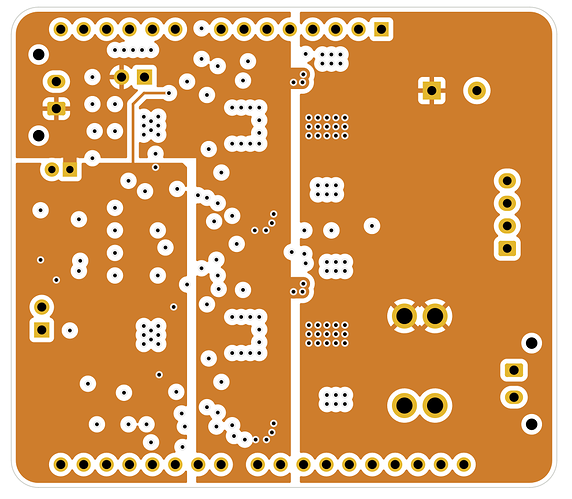 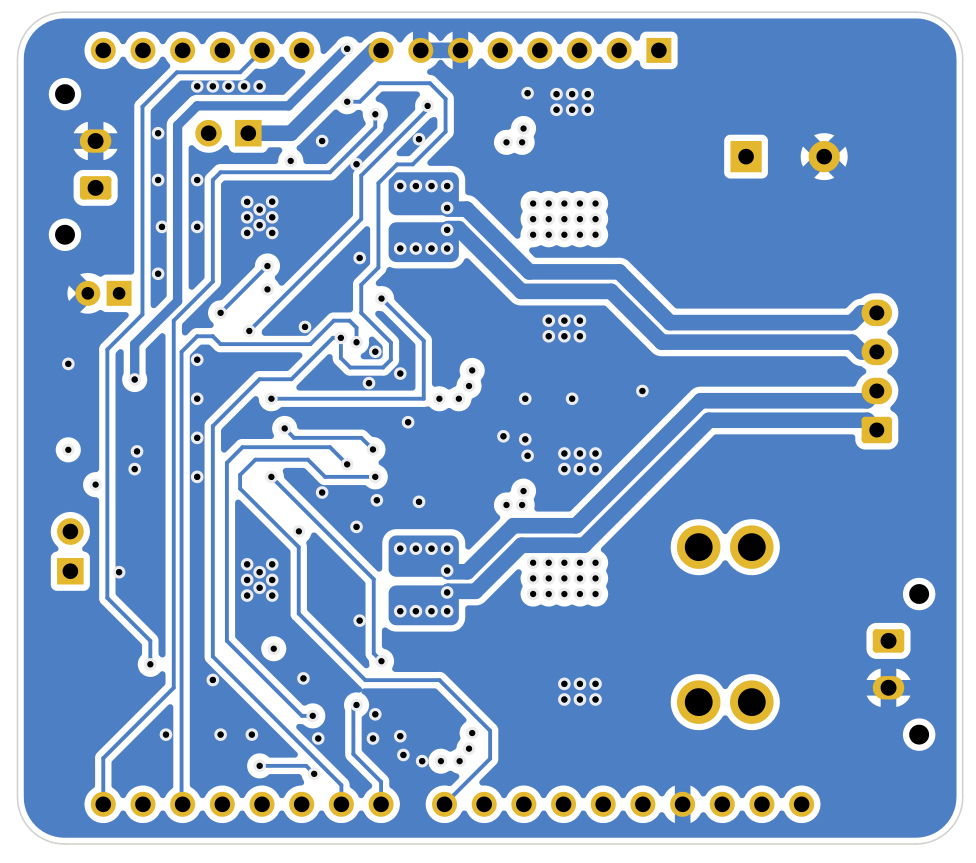 Zoomed view of one bridge 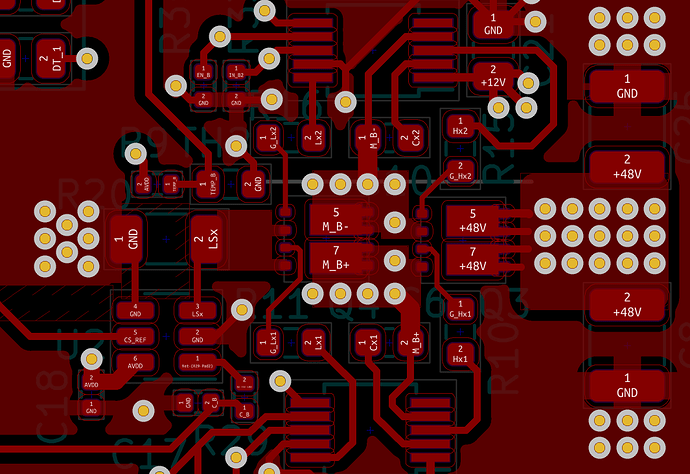 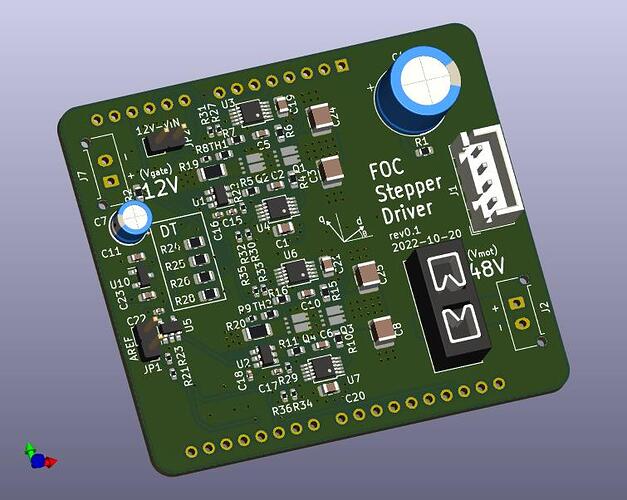 @Valentine After your very helpful comments in the other thread, I was kind of hoping you might have a few thoughts on the design and/or on the four open questions I mentioned in the first post

I am trying to make sure I don’t miss any major issue in the design before ordering the first prototype batch. On the other hand, the design has been mostly finalized for four weeks already - I just applied a few minor tweaks here and there, such as adding bleed resistors to the power rails. So perhaps I should just bite the bullet and see how the first prototype works out.

Without having gone into the detail, one thing you could do is to increase the width of traces going to stepper. Im sure you calculated the width, but it does not hurt to give it lower resistance. Maybe run them on either side of those vias, since it seems they are not connected on that layer anyways. 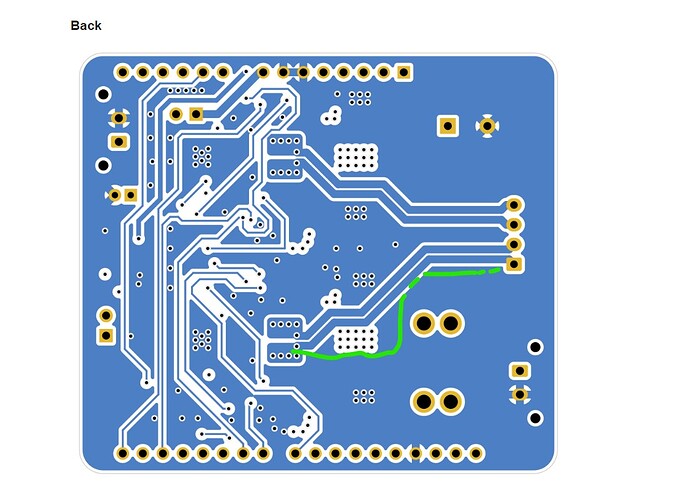 Another thing; why do you have them narrow traces there when you could make a fat trace or solid plane? 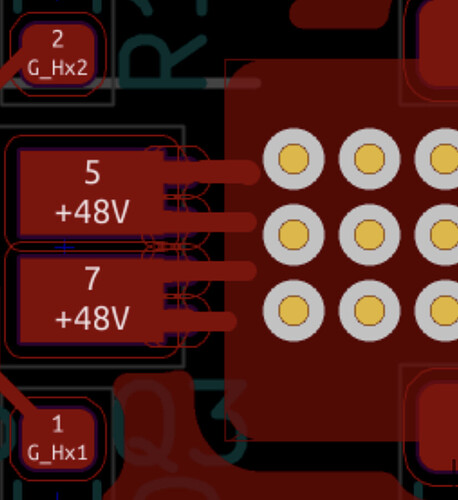 I will have a look. The reason I didn’t offer any was that I’m not familiar with stepper motors and some components you are using to a point I could actually provide constructive PCB design feedback, else I’m watching this thread carefully. I’ll review one more time and let you know.

I really like the general idea of wiring the motor and switching power, perhaps even MCU power. Trying to imagine a barebone system, like a CNC or similar, with eg. 5 steppers. The main board should then handle all power conversion, or you power the MCUs over USB, which would make sense if you want USB access on all stepper drivers through a hub. But then again, it should also work like a standalone driver. FYI someone in the OpenPNP community made a Teensy 4 main board running Marlin. It’s called the PeeNaPle

It should be relatively simple to do a FOC main board based on the same Marlin branch.

I don’t get the Arduino Uno format though. The modularity of it is great, but it’s not exactly stepper friendly?