Hey @nikolaewich1988!
So many interesting issues, I love it.

You are using the encoder right?
What is the velocity you are trying to run your motor on?

Electric angle of the motor should not change, at all. Especially not 0.6 rad (35 degrees). This is not possible. So SimpleFOC does not support adding two different electric zero offsets simply because there is only one.

If you are going to the velocities of >200 rad/s then you will start seeing the issues. There are multiple facters that come to play and electrical angle is only one of them:

In most cases, we have to deal with a combination of all of these issues at once.

Fortunately there is a simple fix to help avoid issues 1 and 2 using the zero electric angle 3.
It is called field weakening and the simplest way to implement is to change the electric zero angle depending on the velocity direction you are spinning your motor with.

In you Arduino program you can add a new variable zero_angle_toremember to remember the zero angle found by the library. Then in the loop function you can change the zero_electric_angle proportional to the velocity.

Thanks for your help, but I’m getting a compilation error. 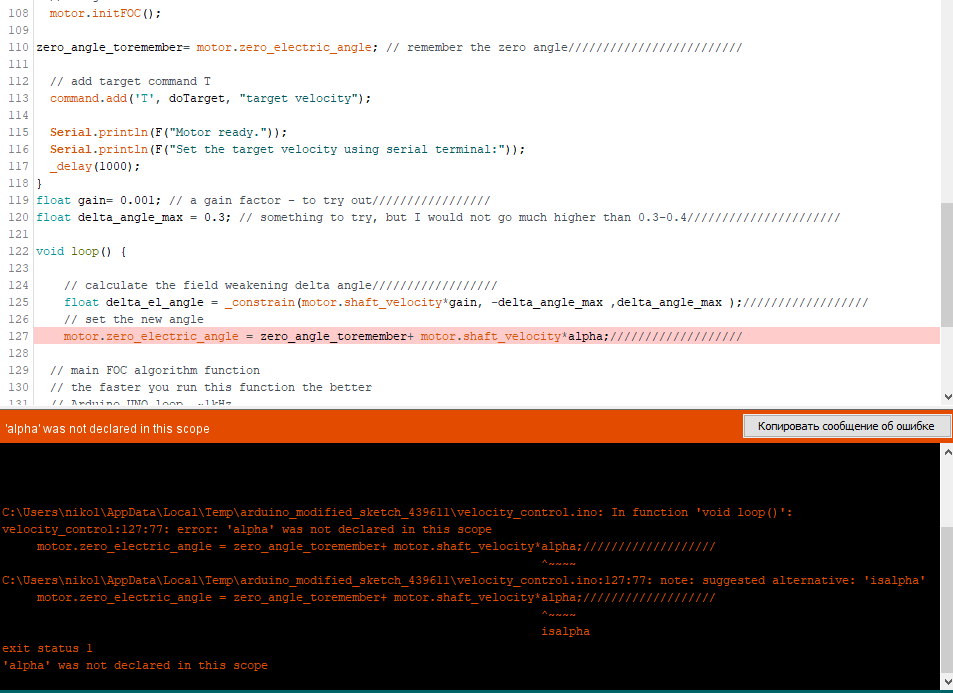 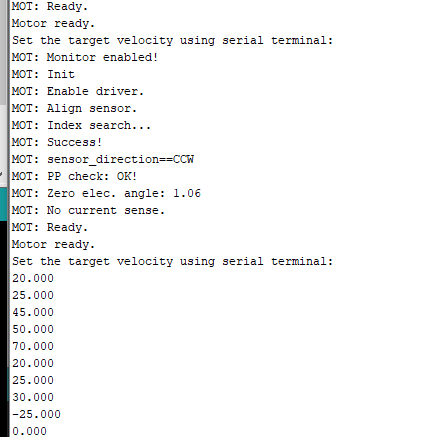 I could send you a video of the work, but I don’t know how to do it

What is the voltage_sensor_align value you are using?

Have you tried to change it?

tried from 1 to 5
in any case, I found the angle at which the engine rotates equally in both directions 1.22.
But this angle is also not correct, because I also found angles for the direction of rotation at which maximum energy efficiency is achieved. There must be a way to specify them, right?

There is only one electrical angle. You cannot have more of them. Simplefoc does not allow to set them that way.
You’re using Arduino nano?

If you really think that in your case there is absolutely no other way but to force these two angles.
I would advise you to augment the gain value in the code that I’ve sent you. gain=0.1 for example

Otherwise you can do this: 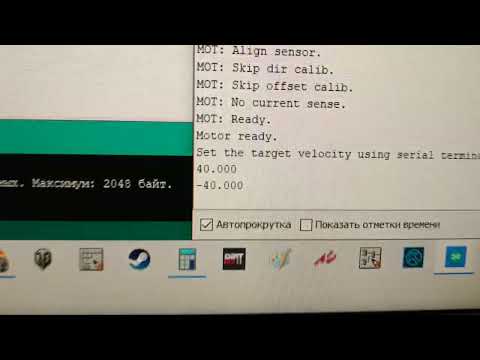 Thanks for your help, but I’m getting a compilation error 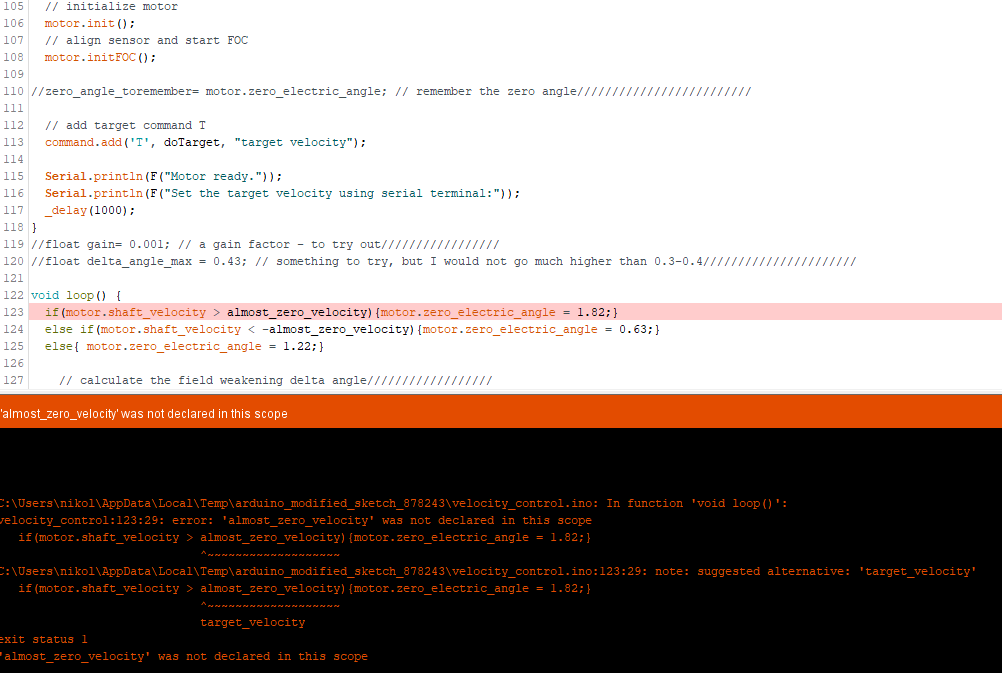 put this before the loop fuinciton.

try different values to see which one works the best for you.

I sent you a video, did you watch it?

now it works great in both directions. Hooray, I’ve been struggling with this problem for two weeks. Thank you so much for your help

Hi,
Can you share, how you were able to solve this?

I am having a similar kind of problem but in torque mode.

In clockwise rotation the current consumption is high and the motor speed is slow, while in anti-clockwise the motor consumes less current and has a high speed.

Any recommendations on how to solve it.

@nikolaewich1988 has been able to solve his issue which in a very dirty way.
It works but not more than that

The fix works but is not a general solution and most probably there is some other issue that we are not aware of.
The description of possible issues and one potential solution is here: Current consumption - #2 by Antun_Skuric

@MoidKhan, can you give us insight in your setup first?
Which motor/driver/mcu…
Which torque mode?
Is it always the same direction?
What is the velocity you are spinning you motor with (roughly)?

thanks for your reply.

I am using a 4 pp motor with esp 32 MCU and DRV 8302 board. Currently using voltage torque mode to move my motor at desired torque based on changing the voltage. In my setup, When applying the + voltage the motor consumes a large current ( checking by PSU) and the velocity/speed of the motor is lower compared to when - voltage is given. At - voltage, the motor consumes less current and high speed.

What would the effect of a large sensor latency be?
Could this be a possible explanation for needing two values of the electrical angle?
In fact, neither of them is correct, but the difference is accounting for the sensor latency, which would have a opposite effect depending on direction of rotation (i.e. in one case actual position would be lower than received position, and in the other case actual position would be larger than the received position)?