The thing that I’d like to ask, perhaps, looks like a noob question. However, I would like to deeply understand the code and possibly solve my doubts

Shouldn’t the function move() calls setPhaseVoltage() and therefore remove it from loopFOC()?

Normally, the loopFOC() is called before than move(): 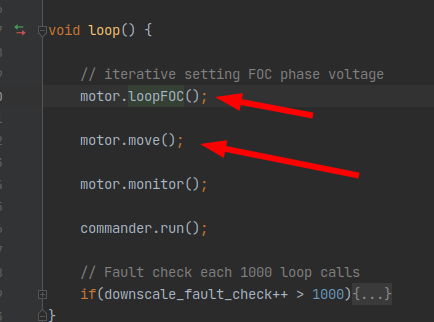 Perhaps, I am missing something here…

In simplefoc the move function represents the motion control loop. It will calculate the necessary torque command to be sent to the motor in order to maintain set point velocity, angle or torque (in torque mode the move doesn’t do much).

If you look into the docs you’ll see that when explaining the different motion/torque control loops, the blush square in the graphs represents the loopFOC and the everythibg around is the move.

We could combine the two functions yes and call the loopFOC inside of the move but the we have chosen this approach for many reasons actually: