A little bit shooting in the dark here.

All retailers ran out of F103 and my only option is to use a clone.

I am looking at the documentation and it’s a near carbon copy of the STM32 one.
Usually I don’t support the concept of using Chinese clones but for development and r&d I can bend the rules.

Has anyone even tried this one? Would it work with STM’s debugger and programmer? Anyone tried SimpleFOC on this one?

Thank you. What programmer did you use? I am using STLINK-v2 or STLINK-v3, are they compatible? Is the memory mapping identical? Is there any source I could check which clones correspond to which ones? Giga are the only ones unfortunately currently in stock at JLC. I am watching as the last STM32F103 are being run down, someone just put an order for over 1000 at JLC, and they are down to a few hundred as we speak. They’ll be gone in a few days. GD32F103 are still at about 2000.

ARTERY has a AT-LINK as the programmer, I think it is compatible with STLINK, but I still could not successfully program AT32F by using STLINK but I think it must can. The registers mapping is almost the same as STM32F. But I am not sure if there is so much to order, I just always bought several from TAOBAO.

Great! Would it work in Arduino IDE?

You can compile using all your favorite tool then program using ATLINK and ATLINK comes with the programming tools. Only KEIL can be used in on-line debugging.

Great, so the workflow would be I build the hex on Arduino and load using the AT-LINK?

Yes, you can build the hex using Arduino or platformio or else you want, then program that hex using at-link

ARTERY has no inventory at JLC however Giga has some, I’ll design a quick dev board and order to check if this would work. May be if I’m lucky my st-link will program it. Just checked the addresses on GD32F103C8T6 and they match, it would be a miracle if the MCU could actually be programmed like an off-shelf STM32F103, it will save a ton of time and hassle.

Also, online I see they were able to overclock the Giga to 120MHz, and the memory access has zero wait, so the performance would be twice the “Blue Pill”.

Let’s wait and see if anyone else on the board has experimented with something similar however.

I’ve got ready to run open source software here → https://github.com/vanvught/GD32F103RC-DMX512-RDM
It is based on Eclipse CDT with GCC cross-compiler.

GD32F103 is a functional clone. CS32F103 is a copy clone. Subtle but important difference. Not sure however if this is the right forum to argue such minutae.They both rip off STM’s IP.

They both rip off STM’s IP.

GigaDevice had bought silicon IP license from ARM. It is just yet another MCU based on a ARM Cortex-M profile. The GD32F103 is not binary compatible with the STM32.

Not according to ST Microelectronics 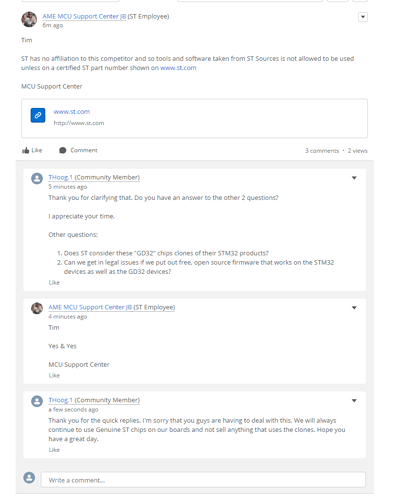 If our opinion about these GigaDevice chips is not enough, the people over at Olimex contacted STMicro about the GS32 chips and this is what they replied with:

Those GD32xxx devices are effectively a kind of clones of our STM32, but it’s a pure piracy: no agreements of any kind between ST and Giga Device, no license… nothing. ST legal people are in charge of this problem.

We don’t think that gets any clearer than that.

With the current market situation, I can understand that STM makes this statement.

There is also https://www.facebook.com/groups/STM32Developers/posts/980105136241457 where it shows different opinions. 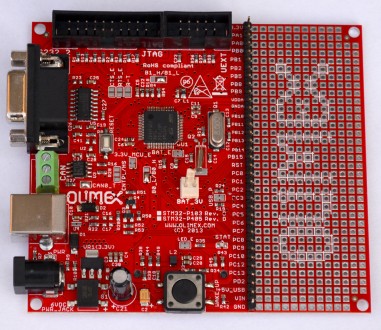 Our previous blog post made lot of buzz about the STM32 pin to pin and functional compatible processors made by Chinese company Giga Device. Some people at Giga Device got upset from the comments t…

I was planning to talk to ST Micro in Vegas for CES in a few days, unfortunately they changed it to virtual only. Ill catch up with them end of January in San Francisco for Photonics West.