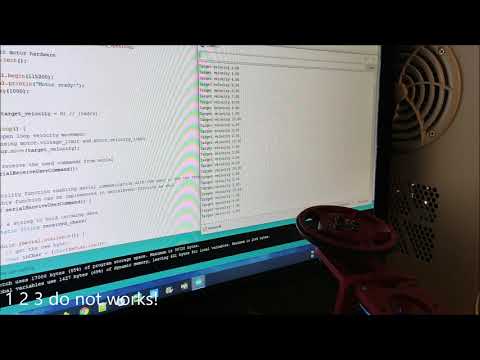 If you run your motor at 15rad/s for 5 minutes does it always stop at the same time?

This could be the float bug discussed here:

Hello everybody! After some discussions at github comments for a pull request (https://github.com/simplefoc/Arduino-FOC/pull/37), I dicided to open a new topic for this problem, as probably several users are involved. The problem is the present implementation of the motor angle inside simpleFOClibrary, because of the insufficient precision of the float data type. In order to avoid naming confusions, as there are different definitions for phase angle, relative angle, absolute angle and so on i…

TLDR: floats are used in library and can overflow. It doesn’t affect all modes in the same way. Open loop velocity mode is the most noticeable.

Perhaps if you print out motor.shaft_angle and motor.shaft_velocity it will become clearer if this is the float issue.

Did you say you were using MagneticSensorAnalog.cpp for your two sensors? This sensor has had less testing than other sensors.

Yeah, that is surely it. This is the same bug.
Ok. I’m going to resolve this right away, at least for the open-loop mode!

Hey guys,
New release is out v2.0.2 in which this bug should be taken care of.
I’ve tested with my motors and it seems to be working well

Yes, MagneticSensorAnalog. Only one way to connect two sensors to this controller. It works…