Wow, that is surprising! But good to know that the code really is simple enough there’s almost no way for it to introduce errors

And that magnets can slip in improbably repeatable ways.

You could anneal the PETG to get the shrinking out of the way before fitting it. Crush ribs are a good way to do precision fitting by hand, because you can see how much you’ve removed from each one to keep it concentric. Plus it gives you a little more leeway between when it won’t fit at all and when it’s too loose. And if you can get glue to stick to the inside of the shaft more strongly than it sticks to the magnet holder, it will function as a spline even if it does become loose.

Another potential material would be some moderately hard flex filament, so it can compress a bit and will take more shrinkage before it becomes loose.

Hm, it is all rotational symmetric and the axis is horizontal. I can‘t really see where gravity could cause a significant rotational force here. I suspect more a magnetic effect and since near the magnet it is all plastic or symmetrical again, I suspect the magnets inside the motor. Inductivity can be excluded since it happened without feeding the power rail as well. It was really surprising, you should have seen it. I could spin ten turns back and forth and the accumulated error was close to zero again, as if friction was very low and constant.

You are actually right - the magnet will always be pulled to another magnetic field on the rotor (depending on the distance and mag field strength) and often even pushed by the magnet on the oposite side.

For some reason (I have no idea why), I though the magnet had plenty of space to move around. In that case, centrifugal forces + gravity could create a similar effect depending on the speed of rotation.

So, everything fine now. I have printed a part using PC and 100% infill.Error is now alweays <0.02 rad. I will run a test over some days and see how it behaves. I will also include the sensor test in the startup code of my project, to make sure that I detect sensor problems after a lonfger time too. With the slipping magnet I am also not surprised anymore that my ESC blew up.

Have a nice weekend and thanks again for all the advice,
Chris

BTW, I made another interesting discovery, the sensor itself seems to lag a bit in its measurements. It looks as if there was some kind of control loop or so built in and certainly there is some delay caused by the sensor internal processing. It is surprisingly high though. In the diagram below you see in blue the mechanical position and orange the sensor position in rad. Between each step there are at least 3 ms plus code execution time (printf takes long…). I expected the sensor to react faster to position changes. Fotr me that’s no problem, but in other applications this might be critical. I used the raw position as returned by the class MagneticSensorAS5047 per default. 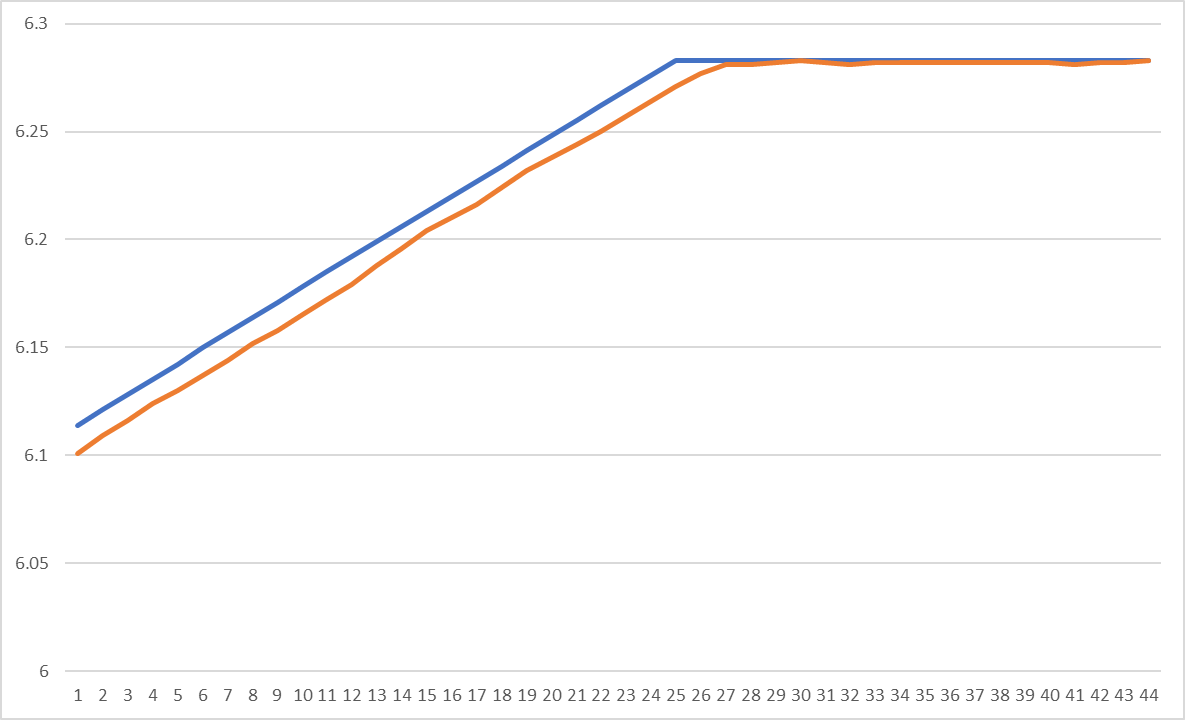 If I do the same, but reading the compensated value, the delay is even worse, but I only tried one run and created no real statistics on it, so no scientific investigation.

I guess what you are seeing is the propagation delay. Here is a snip from the Datasheet.

The propagation delay from the datasheet is a very different order of magnitude than what I observed. I think so that my interpretation is totaly wrong. It is more likely the motor has not yet reached stable position than that the sensor has such a long delay. I just modify my test routine to take that into account.

Wow, it takes up to some 10 ms until sensor readings become stable, but timings vary significantly. The average is something like 15 ms. I take 64 samples per electrical rotation (waiting for stable reads at each sample) and in between there are 16 steps where I just set the phase voltage and don’t wait for anything to settle. Should I ever write code for something which requires very accurate positioning, this is certainly something to take into account.

If it is a constant factor/variable, then it’s a matter of defining the lag, I suppose.

Does your SPI interface use DMA. I’m no expert in ST MCUs and maybe there is no real gains in DMA transfers since the data is quite short/small amount. It would be interesting to compare though

while the effect here is in the range of some ten miliseconds.

I see your point. When you say stabilize the readings, what is meant by that ?

Are you using the sensor in “fast mode”? Or normal?

When running in open-loop mode you’re just rotating the magnetic field, and “dragging along” the rotor hoping it will follow… you can expect a certain amount of “lag” between the commanded value and the actual position, and a “settling time” as you put it, when the rotor catches up to the field after you stop commutation.
I suppose the amount of “lag” will depend on things like physical motor properties, commutation speed and the voltage applied.

All this is of course significantly improved in closed loop control.

I see your point. When you say stabilize the readings, what is meant by that ?

I read the sensor position several times with a short pause in between untill a number of consecutive readings have a very small and expected difference only.

All this is of course significantly improved in closed loop control.

Very good point! Unfortunately I can’t test it easily, since my tests are all so low level. I need to think about how much changes are required to test in closed loop.On the other side, what I have now is exactly what need with regard to the test routines. Everything else would just be plain curiousity (but isn’t that what drives us all?).

untill a number of consecutive readings have a very small and expected difference only.

True, about curiosity, sometimes too much so

From my viewpoint, if the sensor readings are useless, then the sensor is worthless. That may be too idealistic, but how many iterations does it need for a good enough result? It sounds to me, that you are trying to compensate for a noisy sensor and in that process you are seeing the lag. If we have to predict the angle sensor result, that kinda defeat the purpose of having the sensor. This just adds to the propagation delay challenge.

I know it’s too early to conclude anything about the MT6835, but I have my hopes up.

One jitter problem I’ve had similar to what you’re describing was related to sensor wire harness EMI. I was using unshielded jumper wires, and simple moving the wires around made the encoder signal go from tons of noise like you’re showing, to perfectly stable. Motors were uncontrollable and the temporary fix was to empirically tape one of the wires away from the rest. It worked rather well, but shielded cable might help. I’d move the sensor wires in question around and see if it affects the signal. It was the same result with multiple harnesses, so I don’t think it was a loose wire problem.

Don‘t worry, I am very sure the sensor is working fine and fast. It is the motor which has to reach its position and then has to stop there to have consistent readings. If I don‘t wait with the readings, the error gets slightly bigger, but that is a fairly constant lag (-> @runger ‘s post above). The actual sensor noise which I see is more like +/-2 increments. EMI is no issue as far as I can see. Since I am using SPI, I would expect values due to EMI which are very random and cause large errors. With ABI interfaces it could of course be very different.

As Mechaduino has documented with their calibration-look up routine (above link) the non-linear error of the AS5047 is a real thing. For closed loop control or commutation purposes of a BLDC with low “step” count it may not be an issue, but surely a more precise sensor (0.07 non-linear error when calibrated w. Basic routine MT6835) will produce better results.

If you are able to test the effect in closed loop, we can compare sensors, which will be a valuable asset.

Edit: I must admit, the Mechaduino link does not say, if they are using the, at the time, new AM5047P with dynamic angle error compensation. I suppose the standoff really is about how reliable this feature is ?

Ok the AS5047U is apparently even better. Pardon my ignorance on these sensors. Always great to learn.

Following the discussion above, I started implementing a sensor alignment test for closed loop based on the same conscept as for open loop, but when I think deeper about it, I believe this is nonsense and the measured misalignment will always be close to zero, since the reference position for the control loop is always the sensor position. Am I right with that assumption? Any ideas how it could be done better?

The same test does not make sense, I don’t think. You don’t have two seperate references to compare like you do in the open loop case.

Of course one solution can be an external test rig, with its own sensor - assuming it is at least as precise as the motor sensor, you can use it to check the primary setup.

The motor settling time test makes a certain amount of sense, and could be used to check how long the motor takes to come to rest. This will depend also on the PID tuning, as a badly tuned setup may oscillate so much it just doesn’t settle.

More generally, can set the target value and see how closely the system tracks the target value as it changes. The difference between these curves will be a measure of the quality of control, both in terms of latency and accuracy.

I was also thinking about a test where you bounce the motor back and forth between two pre-defined positions, say -30° and 30° within a given time-span. When this time-span is long, the motor will reach the ends, and perhaps even come to a stop there. As you decrease the time-span, the motor will spend less and less time at rest, and eventually reach the point where it does not fully arrive at the -30° or +30° points any more. The test can be extended with physical or optical end-stops, which are used to trigger the direction changes.
I’m still thinking about it, but I believe it could be an interesting test, and allow you to experiment with ramp-values and give information about the sensor latency by comparing timings vs. measured sensor positions.